As some of you may know, we spend a lot of time in a place called Pelican Bay.It’s an Eden-like harbor that lies between the islands of Cayo Costa and Punta Blanca on Florida’s southwest coast. It’s just south of the Boca Grande Pass, at the convergence of Charlotte Harbor and Pine Island Sound.

Anchor holding is excellent in a sand/mud mixed bottom. Protection from east and west winds is excellent. Sometimes north or south winds can sneak into the narrow entrances and cause a bit of a roll, but you can move about in the anchorage to escape a blow from any direction. In a worst case scenario, the far south end of Punta Blanca has a nifty hurricane hole that will shield your vessel from winds in any direction. It’s a bit tricky getting in with a deep draft vessel, and is pretty much a one-boat anchorage, but it’s very safe in a storm. 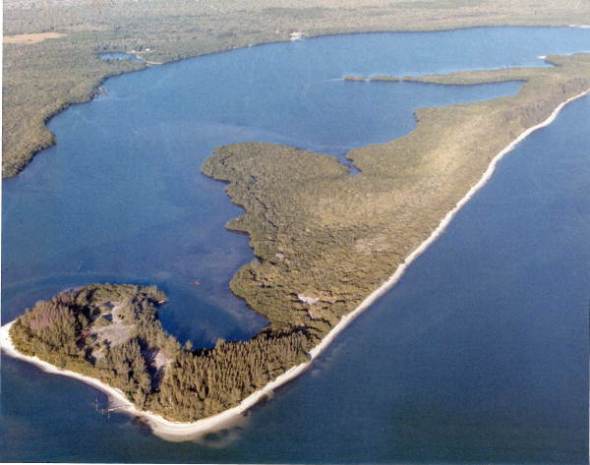 What else makes it special? The island of Cayo Costa is a tropical paradise. The only full-time inhabitants are the park rangers. They man a small store with a few essentials, including ice for $4 per bag. They rent kayaks and bikes for exploring the island. They also run a tram to and from the Gulf side beach. It will carry you and your beach stuff across the island at two hour intervals. Last train back to the docks is at 4 p.m.

Cayo Costa sports a seven-mile stretch of white sand along the sparkling sapphire waters of the Gulf of Mexico. We prefer to skip the park ranger ride and resulting tourists who’ve come by ferry and dinghy to our own private beach. 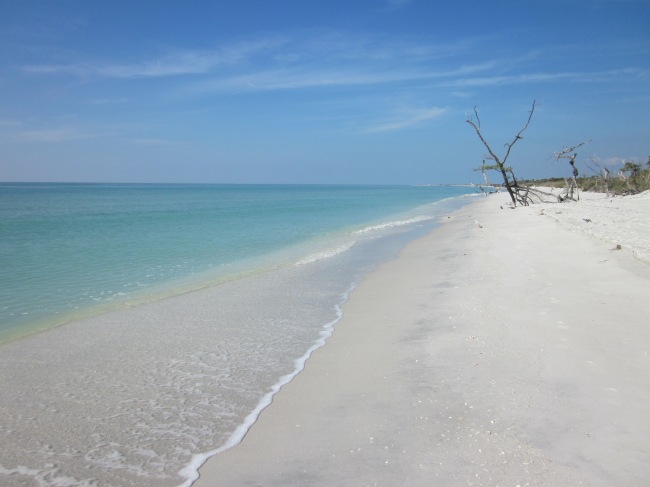 There are rarely other humans on this stretch. It’s so awesome to hang out together, just the two of us, and gaze upon the Gulf. 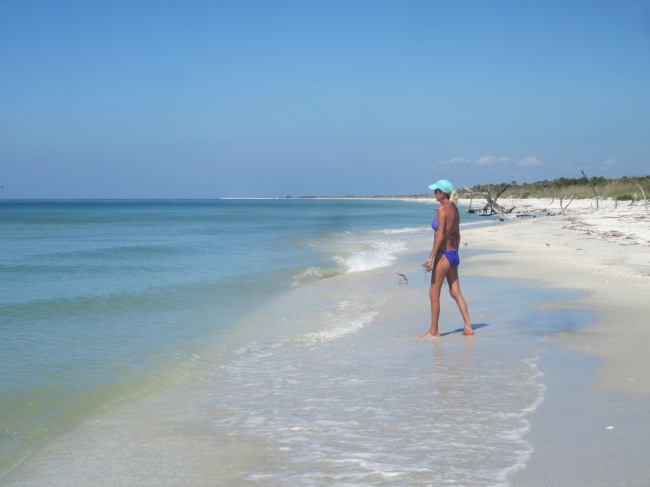 It’s also a great area to explore via dinghy or kayak. Lots of wildlife including every aquatic bird known to the south, manatees, dolphins, dozens of fish species, and even wild pigs.

The best part about it is the peace. It’s so quiet here. There are no cars or trucks, no lawnmowers, no sirens. There is the breath of dolphins, the call of the osprey, and the sound of water lapping gently on the hull of the boat. It’s rarely crowded, except on holiday weekends in season. We have several times enjoyed being the only boat in the anchorage. On the other end of the spectrum, New Years Eve hosted 70 plus boats.

For provisioning, one can either cruise up Charlotte Harbor to Punta Gorda, about 20 miles, or head south down the intercoastal to Fort Myers Beach, about 26 miles. If you choose to go south via the Gulf route, it adds considerable mileage to the trip, but you can avoid the sometimes busy ICW with the constant boat wakes.

We can stay for a month easily and sometimes dread returning to civilization to re-provision. We’d much rather stay at anchor and enjoy beautiful sunsets.

What do we do with all the free time? We relax. We walk on the beach and pick up sand dollars. We read. We have an adult beverage or three and enjoy the serenity. We explore the nearby islands. We meet up with other boaters on a sandbar for happy hour. We do whatever we feel like doing. It’s called Freedom. 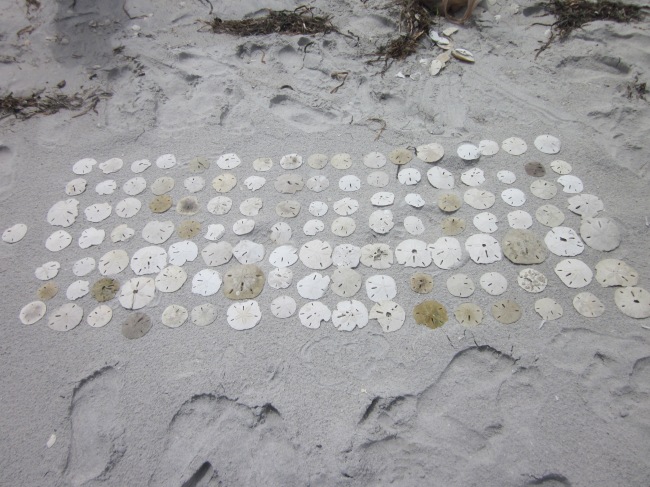 We have explored Florida’s west coast from Tampa Bay to The Keys. We have found no other anchorage as nice and peaceful and safe as Pelican Bay. Most Keys anchorages offer poor holding and little wind protection. A few municipalities have decent mooring fields, but then you are surrounded by all the trappings of modern society. We’d rather be at one with nature. No better place to do it then in Pelican Bay.

7 thoughts on “What’s So Great About Pelican Bay?”