On May 20, 1985, Radio Martí began broadcasts to Cuba from the United States. The first day of broadcasting was chosen to commemorate the 83rd anniversary of Cuba’s independence from United States rule on May 20, 1902. The fears of broadcasters proved well-founded, when Cuba-based transmitters briefly broadcast powerful signals on the medium-wave band in 1985, disrupting U.S. AM radio station broadcasts in several states. Cuba CONTINUES to broadcast interference against U.S. broadcasts specifically directed to Cuba in attempts to prevent them from being received within Cuba.

The transmission station for Radio Marti is located in Marathon, Florida. The facility sits on many acres of prime waterfront real estate, smack dab in middle of the Florida Keys.The US Government spends 24 million dollars annually to maintain broadcasts in Spanish to the Cuban people. The program has been fraught with waste and abuse for many years. What’s this got to do with boating?

Sister Creek is one of the entrances to Boot Key harbor, and a popular anchorage when the mooring field is full. In order to anchor within the creek, vessels tie off their stern to the mangroves along the western edge.

These vessels are anchored in the shadow of several large transmission towers belonging to Radio Marti. 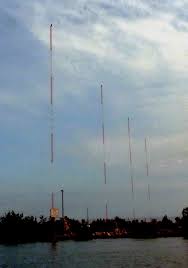 There have been any number of reports of weird intereference with electronics and boat systems from cruisers who have anchored in Sister Creek. Most commonly captains report failure of their VHF radio to send or receive. Others have reported GPS anamolies, radar malfunction, auto-pilot strangeness, and even damage to radios. SSB radios seem to be particular sensitive to whatever radio waves are causing the interference. Additionally, it has been reported that stray voltage exists in the waters of the creek near the Radio Marti facility.

The anchorage itself has its charms. It’s quiet, scenic and very well protected from winds in any direction. It can get buggy when the wind dies, as you’ll be very close to the mangroves of Boot Key. I wouldn’t hesitate to take advantage of this haven, but I WOULD turn off ALL electronics while in the area. Even if you just choose to use Sister Creek to gain access to Boot Key Harbor, I recommend turning everything off.

As a side note; our charts for Sister Creek are dead wrong concerning depths. The center channel has over ten feet almost throughout the creek. As you pull your stern into the mangroves, you will still have 7 or 8 feet of water, in very close. The only shallow spots appear to be at the outside markers. Vessels with 6 foot drafts can safely navigate this channel, at high tide. We see large sailboats come and go on a daily basis.