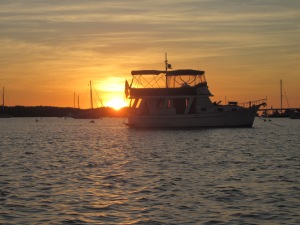 The great state of Florida has had a schizophrenic relationship with cruising boaters for many years. In the past, each municipality had it own rules in regards to anchoring. Some wouldn’t allow it at all, while some limited anchoring to a few days. Some cities/towns didn’t mind liveaboards and cruisers and had no restrictions on anchoring at all.

I don’t have space to rehash the complete history of boaters fighting for the right to anchor in Florida waters, but it all seemed to be settled a few years back with the creation of the mooring field pilot program. It wasn’t perfect, but it was a reasonable compromise that we’ve learned to live with. There was extensive research and ample opportunity for public comment. The program was extended just recently.

Then during the 2014 legislative session, a Democratic lawmaker forwarded a bill to that would once again allow municipalities to make up their own rules. It was defeated. Over the past winter, the FWC made thinly veiled attempts to restrict anchoring through regulation, rather than legislation. They circulated a very poorly written survey with no option to disagree with a certain provision. This provision would create a “set-back”, restricting anchoring within so many feet of developed property.

Now, it’s 2015 and a Republican lawmaker has put forth yet another bill to restrict anchoring. It calls for a 200 foot set-back from any developed property. It is also poorly written, with no explanation of how this would be measured or enforced. The 200 foot buffer zone would virtually eliminate most anchorages in southeast Florida, and severly restrict anchoring along the entire length of the ICW in Florida. There are numerous anchorages on the west coast and in the Keys that would also be affected. It even disallows anchoring within 200 feet of a mooring field, which would eliminate most of the anchorages in Boot Key Harbor, Marathon.The entire text of the bill can be seen here:
https://www.flsenate.gov/Session/Bill/2015/1548/BillText/Filed/HTML

But the issue is this;
An owner, operator, or person in charge of a vessel may not anchor or moor a vessel within 200 feet of the shoreline of developed waterfront property, as defined in s. 327.02, between the times of one hour past sunset and one hour before sunrise.

What do we do? Send emails. Today. Be civil and polite. But make it clear that you strongly oppose ANY set-back.

Here are the people you need to email, the committee members: