The above screenshot shows the “shallow draft, inside route” through some of the Berry Islands. They aren’t kiddding!

We were ready to leave Great Harbor Cay and do some exploring. We were told to go to the fuel dock at high tide, so that’s how we planned our day. High tide was at 11:00 a.m. We topped off our fuel tanks and headed out for Hoffman’s Cay. It was to be a six hour trip. Tides change in the Bahamas every six hours. Did you figure it out yet? I didn’t until we reach the entrance to the inside route. I said “Oh crap”. Kim asked what was wrong. I explain that we were entering shallow water at dead low tide. If you look closely at the above chart, you’ll see some spots with less than four feet of depth. We draw four feet. We were also loaded down heavily with fuel and water, adding a few inches to our draft.

I slowed to a crawl. We were in six feet of water. Bump! We hit something. I checked the depth finder. We still had six feet. Must have been a rock or some coral. Then we approached the really skinny spot. I slowed some more. The water under us got even more shallow. I guessed we wouldn’t make it. Sure enough, we ground to a slow stop on soft sand.

We had a good west wind that was producing a two-foot chop. With the boat still in gear, I felt a wave lift us up and we moved forward twenty feet or so before settling back down on the bottom. Huh! I left the boat in gear. We moved again, maybe thirty feet forward, before we came down on the sand again. We continued to leap frog like that until we had enough water to float freely. I throttled up and we carried on. Lesson learned. Pay attention to the tide for your destination.

We anchored off a beautiful beach. We were all alone, with no other boats in sight. Kim demanded that we put the dinghy in and go to the beach. It was just a few hundred yards away. I wanted to sit down with a beer and relax, but I relented. Off we went towards the beach. We didn’t make it. The outboard quit running. When I pulled the starter cord, it broke off in my hand. Great. Now we were adrift towards some rocks just south of the beach. I quickly deployed the oars and started rowing back to the boat. It was a tough slog against the waves, but we made it.

Fortunately, I had not one, but two spare pull-cords. I was prepared for this!

I fixed her up the next day and we spent hours on the beach. 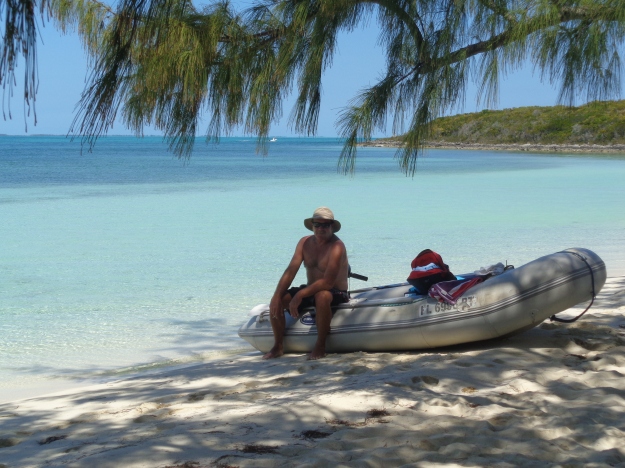 We even hike a trail up to a blue hole. Pretty cool.

We spent several days exploring the neighboring islands via dinghy. The water was spectacular.

All in all, we very much enjoyed our stay in the Berry Islands. Much less crowded than most destinations in the Bahamas. The water is awesome, if not a tad skinny. Any time we moved we had to keep the tides in mind. There’s about a four foot tidal swing. Meaning, that at low tide a spot might only be three feet deep, but at high tide it would be seven feet deep. We often sat and waited until close to high before moving to the next spot.

We loved the Berrys. You would too.

3 thoughts on “Misadventures at Hoffman’s Cay”