We love our life in Florida. We’ve traveled south Florida and the Keys extensively aboard our boat, enjoying the beauty of her beaches and waters. We live on the water, every single day. That’s why it’s so sad to report on the horrible water problems we now face. We’ve watched our waterways undergo a constant barrage of pollution, fresh water influx, toxic algae, red tide, and even radiation.

The water in south Florida is not safe.

It starts with Lake Okeechobee and the manmade disaster that directs the lakes waters east and west to the coast, instead of south through the Everglades as nature intended. I wrote about it here: 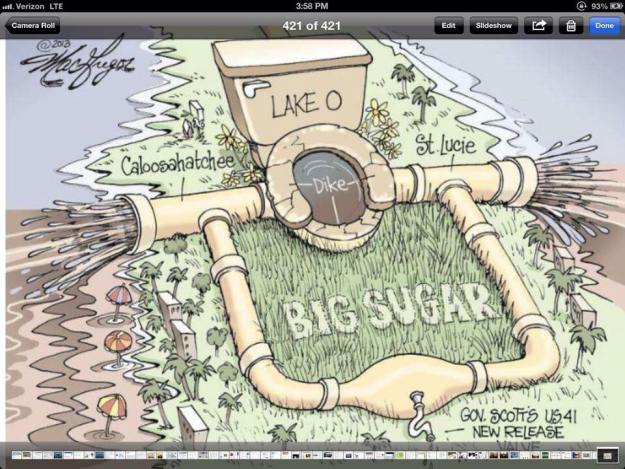 But that’s not the end of our problems. Recently, heavy rains caused massive amounts of sewage to flow into Tampa Bay and surrounding waters.

The latest total estimate of St. Petersburg’s spilled sewage now stands at 128 million gallons — and that’s not counting the unknown amount of waste that gushed from more than 40 manholes onto city streets.

Most of that waste has been dumped into Tampa Bay. But the latest reported spill took place in west St. Petersburg, and much of it emptied out of stormwater drains into Boca Ciega Bay.

St. Petersburg’s latest spill brings the total estimate of waste local utilities released across the bay area to 230 million gallons — an amount that has continued to climb since Hermine’s drenching rains. And the city’s estimates could continue to rise. 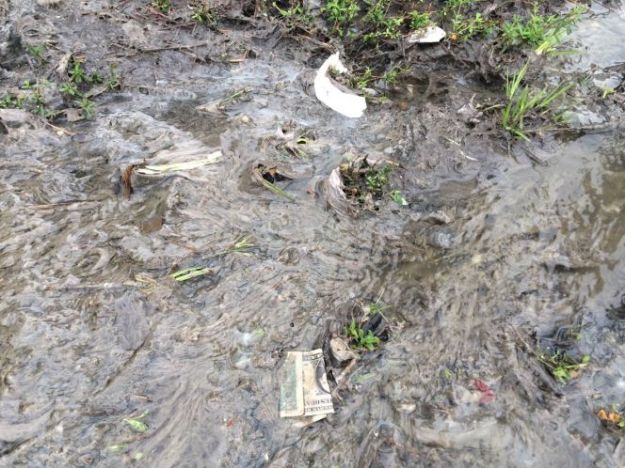 At the same time, the west coast of Florida is seeing the annual arrival of red tide on its beaches. It’s not believed that sewage creates red tide, but it does fuel it, causing a bloom to expand exponentially. The resulting fish kills are an economic and ecological disaster. 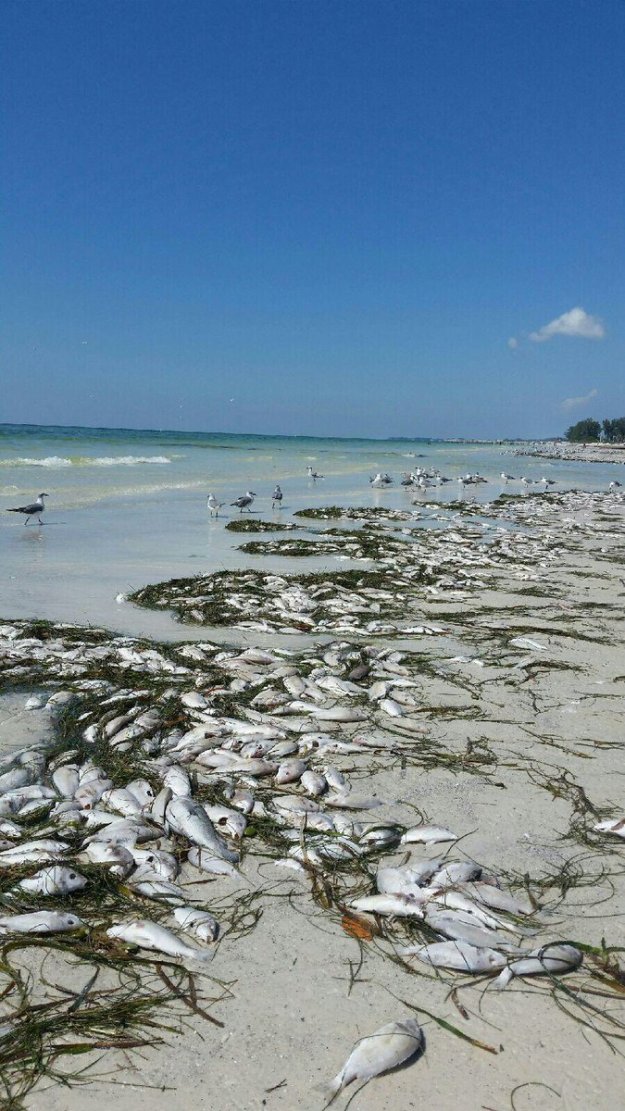 All the beaches from Anna Maria Island down to Don Pedro look like this. Venice, Englewood, Siesta Key, Manasota Key . . . who wants to go to the beach?

More heavy rains have increased the discharges from Lake O once again, pouring black water into the Caloosahatchee and St. Lucie Rivers. These massive influxes of fresh water pour out onto each coast, carrying phosphates, fertilizers, and sediment to fragile estuaries. 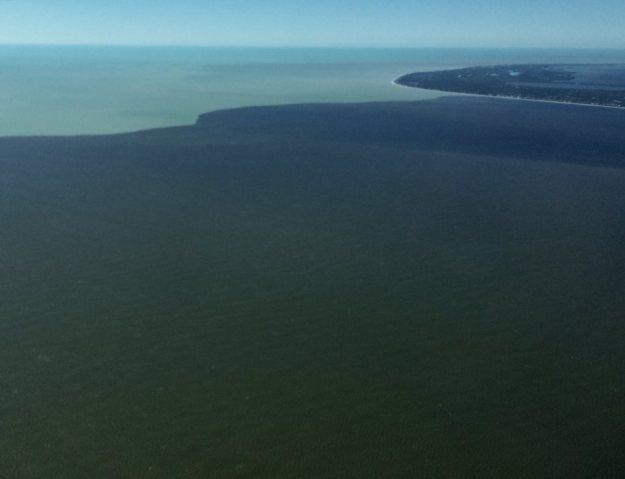 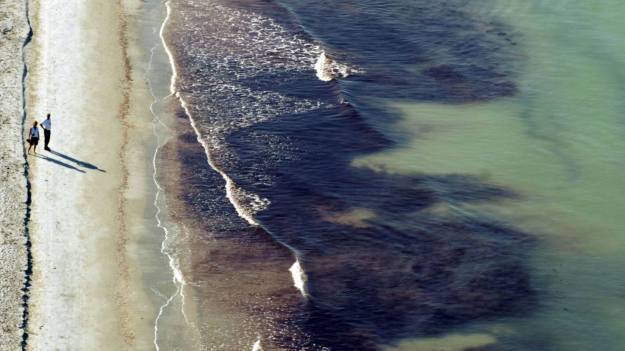 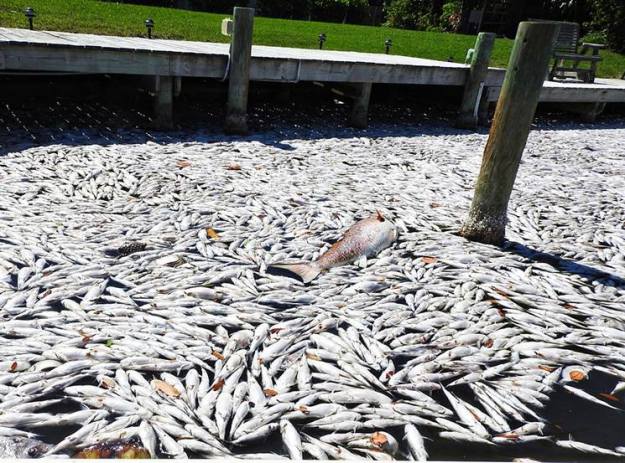 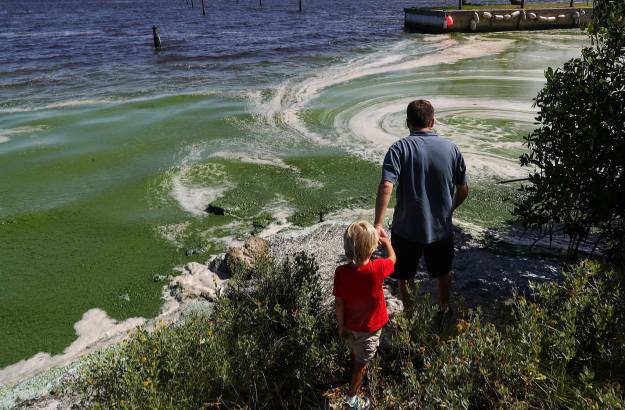 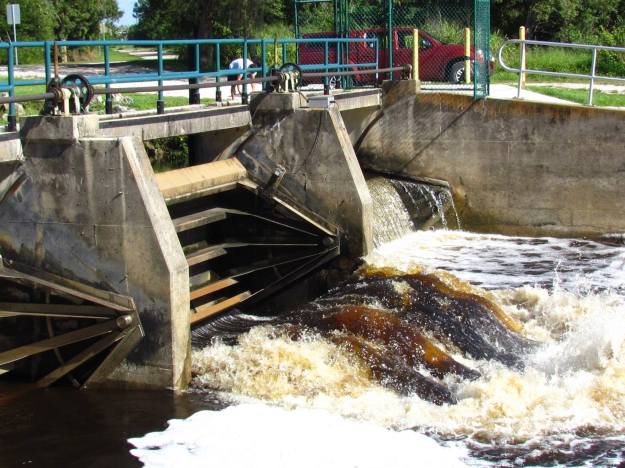 If that wasn’t enough, Florida has suffered two separate incidents which allowed radiation to enter not just a waterway, but also into an major aquifer that supplies drinking water to a large portion of the state.

A radioactive isotope linked to water from power plant cooling canals has been found in high levels in Biscayne Bay, confirming suspicions that Turkey Point’s aging canals are leaking into the nearby national park.

Read more here: http://www.miamiherald.com/news/local/environment/article64667452.html#storylink=cpy
Elsewhere, a sinkhole opens up and radioactive water pours into it.

About 30 minutes east of Tampa Bay, a 45-foot-wide sinkhole opened in late August, depositing at least 215 million gallons of polluted, slightly radioactive water into a vast underground aquifer. (That’s enough to fill more than 310 Olympic-size swimming pools.)
http://www.motherjones.com/environment/2016/09/sinkhole-florida-radioactive-water-fertilizer
The hits keep coming. We haven’t taken a swim in Gulf waters since returning from the Bahamas in June. Reports of flesh-eating bacteria pop up occassionally. The water at Fort Myers Beach smells foul. The water at Venice Beach stinks of dead fish.
Dont’ go into the water!
The problems are many and the solutions are few. Politicians of all stripes have proven incapable of resolving even the slightest issue when it comes to water quality in Florida. During the recent primary elections, most of the candidates that expressed strong support for clean water – lost. That’s the fault of the electorate, I suppose. In the upcoming general elections, I predict we’ll see more of the same. What can we do?
For starters; you can sign the Now or Neverglades Declaration
http://gladesdeclaration.org/
Learn more at http://www.evergladestrust.org/
Lots of info can be found at https://www.facebook.com/groups/SWFLcleanwater/
Other groups working to promote clean water include
https://www.facebook.com/CaptainsForCleanWater/?fref=ts
https://www.facebook.com/bullsugar.org/?fref=ts
https://www.facebook.com/flforcleanwater/
Plan your next vacation accordingly.