It seems I read about another marina/boat fire almost weekly. The cause is almost always the shore power cord, mostly at the boat connection, but sometimes on the power pedestal. I know at least a half-dozen friends who have their shore cord melt. In one case, it caught fire but was extinguished quickly.

Feel for heat. Unplug them. Look for burn marks or melting.

Cause of marina fire that destroyed 12 to 15 boats unclear

This happens in the summer when A/C units overload the system. This happens in the winter when electric heaters overload the system. My personal observation is that newer Marinco cords are often the culprit, but so is the boat owners overuse of their product. A 30 amp cord can easily be overloaded by multiple thermostat controlled appliances, such as a water heater and electric heater running at the same time. Sometimes the connections aren’t tight enough or secured properly. Fortunately, most often the cord melts and fails before causing a fire.

It can happen at either end.

I’ve read that using di-electric grease on the connections helps. I know that making sure the connections are tight and secure helps. Do me a favor, check yours when you have the heat on. Check them when the A/C is on. Be aware of the load you are placing on the cord(s). 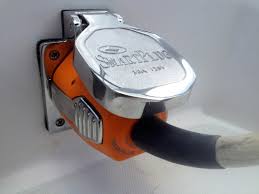 Have you heard about a boat fire near you? Did you check your cord?

Be safe, and Happy Holidays.