Our vessel was in dire need of new bottom paint. The choice was to pay someone to do it, or do it ourselves. After getting a few estimates and comparing them to the cost of doing it ourselves, we decided to take on the challenge. Estimated savings; $1000

There are two boatyards in the area that will allow you to do-it-yourself. Charlotte Harbor Boat Storage couldn’t take us until November. Safe Cove (formerly All-American) could take us right away. 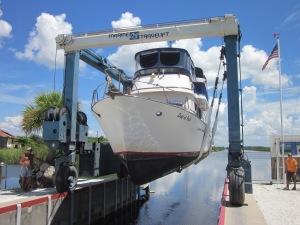 We paid an extra $100 for pressure washing and it was well worth it. 95% of all barnacles were gone before I touched the hull. I had to scrap and poke at the nooks and crannies of the running gear. I chose Trilux 33 for the metal parts. Here’s a before and after of the prop, shaft and rudder. 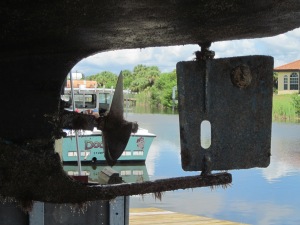 Sanding the bottom was a horrendous job. It was hot, dusty and downright miserable. I started Friday afternoon and worked until dark. On Saturday I started work again early and finally finished at noon.

I wore some old tattered clothes that I should have thrown away a long time ago. When I finished sanding they went into the dumpster. It took about 8 hours of total labor to sand the hull. I was exhausted but thrilled to be done with that part of the job.

We washed it all down and took a break to let it dry. The 95 degree heat shortened the drying process. I chose Micron 66 for anti-fouling. Practical Sailor constantly tests and studies the performance of bottom paints, and Micron 66 is always the clear winner. It’s also the most expensive. Retail is $299.99 per gallon. I bought 3 gallons. 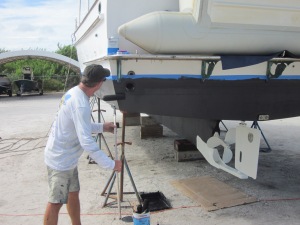 The heat made paint application difficult. It dried up so fast I couldn’t spread it out. It took two full gallons to finish the first coat. I was going to need another gallon. This is when I discovered “Brush Ease” from Interlux. It’s a thinner for Interlux bottom paints. You can dilute by 10% and it makes rolling much easier. I wish I had known before-hand. I used up all my West Marine ten-dollar coupons and got another gallon for $200. This cut our overall savings on the job down to $800. Still alot of money.

The second coat went on much smoother. A third coat was applied to the water line. I had the yard move the jackstands and those spots got two coats. We’d have a full 24 hours drying time before relaunch.

If you ever wondered why it costs so much to have your bottom paint redone, I can tell you. Because it’s a nasty job. It’s pretty much the most miserable work I’ve ever done. I’m not afraid to work hard or get dirty, but I’m seriously considering paying someone to do it next time.

The other night while having a few beers with a fellow liveaboard, the topic of stuffing boxes and packing came up. He had a bad experience trying to get corroded nuts loose in order to replace his packing. His advice was to never let that happen as it turned into a dirty, knuckle-busting job.

I vowed to inspect mine and the beer drinking continued. Yesterday I dropped down into the bilge for a look-see. To my dismay, the bolts were unrecognizable globs of corrosion. After scraping and banging away at them with a scewdriver for a while, I managed to clear them enough to actually put a wrench on them. Should have taken a “before” pic but I didn’t.

A walk to Ace hardware for new stainless bolts and washers, plus a can of PB Blaster was in order. Now every boat owner knows that any job in the bilge is ten times harder than if it was on deck or even on land. It’s dark and cramped and nothing is ever easy to reach. In this case, my work area was further constricted by the a/c pump, strainers and assorted hoses that support the a/c system. Well, we haven’t used the a/c in over three years. I decided now was the time to simply remove all this useless stuff to clear up the work area. Busted knuckle number one was the result, but it did clean up the space and give me room to work. It also created another job for the to-do list. I may as well remove the a/c unit itself now that I’ve rendered it inoperable. I’ll take it to our local marine consignment shop and make a few bucks. That seems to be the way with a lot of boat projects. One job turns into two, or three.

I attacked the nuts that adjust tension on the packing first. They started to loosen just fine, but then stalled as they reached the corroded part of the bolt. Busted knuckle number two . . . More PB Blaster and a pause to climb out of the bilge for some fresh air. I finally got them off and started cleaning the bolt with a wire brush and more PB Blaster. Replaced the old nuts with shiny new stainless, using a locking nut as the back up to the first one.

Then I started on the bigger nuts that hold the backing plate to the bulkhead. The new nuts just did not want to cooperate going back on. Busted knuckle number three . . .They’d come tight and refuse to budge any further, well short of fully tightened on the bolt. I kept backing them off, spraying them again, and retighten. It was tedious work. My hands were now a combination of corrosion, sweat, blood and PB Blaster. Eventually I managed to ram them all the way up the bolts, but today I plan to back them off a tad and see if I can get them any tighter after soaking all night. Then I plan to coat them with a little grease to prevent any new corrossion.

Once finished, I had an ugly mess of goo beneath the shaft. Oh goody! Bilge cleaning. Again, one job turns into multiple jobs. If I was working on a similar project in a garage it may have taken a half hour or so. Down in the Holy Place it took several hours. Spending all that time in the bilge caused me to start mentally ticking off all the other items I should inspect or tighten soon.

So there’s a lesson for you. Don’t neglect this little maintenance chore or you too can spend hours busting knuckles in the dark confines of your bilge. My next book definitely needs to have the word Bilge in the title! For now though, you can read about other adventures of liveaboard boating in Leap of Faith / Quit Your Job and Live on a Boat, and Poop, Booze, and Bikinis, by Ed Robinson. 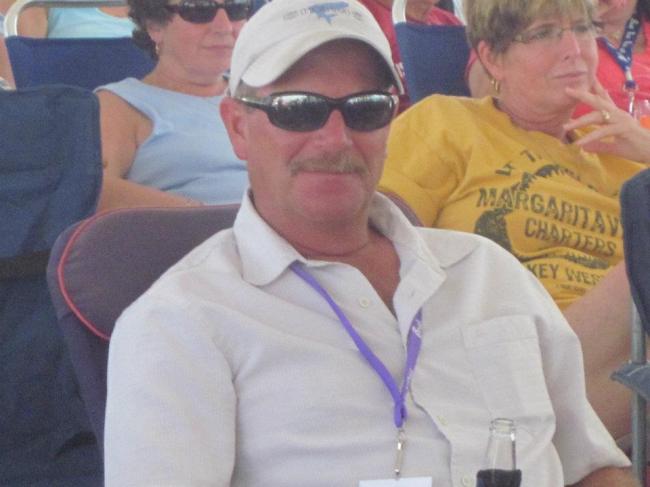