Another destination that we can reach from Pelican Bay via dinghy is North Captiva. It’s a separate island from it’s bigger sister Captiva Island, and can only be reached by boat or small plane. There is no bridge from the main island to North Captiva. The locals like to call it simply North Cap.

North Captiva Island is known for its pristine white beaches and some of the best shelling in the world. There are 5 miles of beautiful beaches to walk on North Captiva, two-thirds of which border a 700-acre state land preserve. Enjoy walking for miles and not seeing any signs of civilization except the footprints you leave in the sand. Many rare, colorful shells can be found along the shoreline.

The interior is dotted with million dollar homes with a spectacular view. Many are available to rent.

Our visit involves taking a 5 or 6 mile ride in the dinghy to Safety Harbor, on the intercoastal side of the island. An old stilt house/fishing shack guards the entrance. 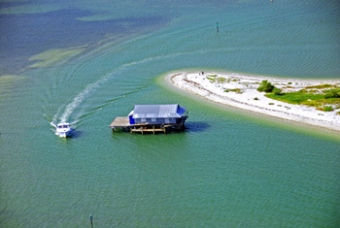 We had lunch at Barnacles, which used to be called Barnacle Phil’s. Good burgers and cold beer, but we dropped a hundred bucks on lunch for four. Must have been the bar tab. There are several canals to explore in a small boat, but Safety Harbor is too shallow for larger vessels. 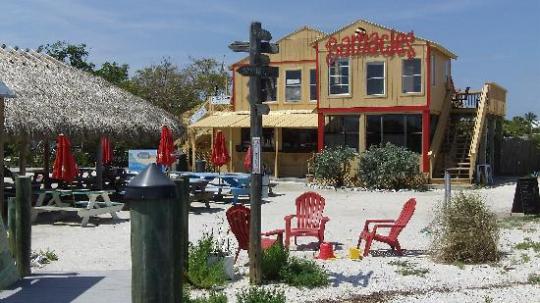 It’s a quirky little community, mixed with crusty locals and upscale vacationers. There are several fine resorts where on can enjoy all the tropical amenities and watersports if so desired.