END_OF_DOCUMENT_TOKEN_TO_BE_REPLACED

Marvin “Popcorn” Sutton (October 5, 1946 – March 16, 2009) was an American Appalachian moonshiner and bootlegger. Born in Maggie Valley, North Carolina, he grew up, lived, and died in the rural areas around Maggie Valley and nearby Cocke County, Tennessee. He wrote a self-published autobiographical guide to moonshining production, self-produced a home video depicting his moonshining activities, and was later the subject of several documentaries, including one that received a Regional Emmy Award.

Sutton committed suicide by carbon monoxide poisoning in March 2009, aged 62, rather than report to federal prison after being convicted of offenses related to moonshining and illegal firearm possession. Since his death, a new company and associated whiskey brand have been named after him.

“Jesus turned the water into wine, I turned it into likker.”

Sutton had a long career making moonshine and bootlegging. Sutton said he considered moonshine production a legitimate part of his heritage, as he was a Scots-Irish American and descended from a long line of moonshiners. In the 1960s or 1970s, Sutton was given the nickname of “Popcorn” after his frustrated attack on a bar’s faulty popcorn vending machine with a pool cue. Before his rise to fame at around 60 years of age, he had been in trouble with the law several times, but had avoided prison sentences. He was convicted in 1974 of selling untaxed liquor and in 1981 and 1985 on charges of possessing controlled substancesand assault with a deadly weapon, but he received only probation sentences in those cases.

He was a short, skinny fella, who always wore his hat – that was kind of his claim to fame, his hat that he always wore. And his bib overalls – he always wore bib overalls. Even when he came to federal court, he was wearing bib overalls. He was a friendly fellow, and of course every time you would talk to him, he would say, “Ray, I’ve run my last run of moonshine, I’m not gonna do it anymore, I’m just getting too old to be doing this stuff.”

— Radio reporter Ray Snader on “Popcorn” Sutton, 2009
He appeared in various documentaries and feature films including Mountain Talk, and This is the Last Dam Run of Likker I’ll Ever Make. In 2007, a fire on Sutton’s property in Parrottsville led to firefighters discovering 650 gallons of untaxed alcohol there, for which he was convicted and put on probation again by Cocke County authorities.
In March 2008, Sutton told an undercover federal officer that he had 500 gallons of moonshine in Tennessee and another 400 gallons in Maggie Valley that he was ready to sell. This led to a raid of his property by the ATF, led by Jim Cavanaugh of Waco siege notoriety, In January 2009, Sutton, who had used a public defender as his attorney in the case and had pleaded guilty, was sentenced to 18 months in a federal prison for illegally distilling spirits and possession of a firearm as a felon (a .38-caliber handgun). Sutton, 62 and recently diagnosed with cancer, asked the U.S. District Judge Ronnie Greer to allow him to serve his sentence under house arrest, and several petitions were made by others requesting that his sentence be reduced or commuted, but this time to no avail. The judge noted that Sutton was still under probation in Tennessee at the time of the federal raid, and said that putting a man on probation again after being convicted five times of various crimes would not serve the community interest. He also noted Sutton’s appearances on film surrounded by firearms and demonstrating how to make illegal moonshine. He said he had considered a harsher sentence of 24 months, but had decided on 18 months after considering Sutton’s age and medical condition.
Sutton committed suicide by carbon monoxide poisoning on March 16, 2009, apparently to avoid a federal prison term due to begin a few days later. His wife Pam, whom he had married about two years before his death, returned home from running errands and discovered her husband in his green Ford Fairmont (which was still running) at the rear of their property in Parrottsville, Tennessee. Mrs. Sutton said, “He called it his three-jug car because he gave three jugs of liquor for it.” His daughter said he had told her in advance that he would commit suicide rather than go to jail, adding that “the strength to die the way he lived: according to his own wishes and no one else’s.”
A conventional grave marker was used the head of Sutton’s grave, reading “Marvin Popcorn Sutton / Ex-Moonshiner / October 5, 1946 / March 16, 2009”. He had also prepared a footstone in advance for his gravesite, and for years he had kept it by his front porch and had kept his casket ready in his living room. The epitaph on his footstone reads “Popcorn Said Fuck You“. 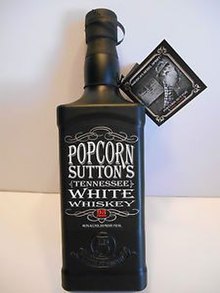 A bottle of the namesake whiskey

On November 9, 2010, Hank Williams Jr. announced his partnership with J&M Concepts LLC and widow Pam Sutton to distill and distribute a brand of whiskey named after Sutton that was asserted to follow his legacy.

They were quickly sued by Jack Daniels due to the similarity of the bottle and labeling. The two parties settled out of court. The terms were not disclosed, but the bottle changed.

I’m sure this stuff is available near me. I’ll have to give it a try. Cheers Popcorn!