Florida’s government is building a bridge to North Captiva Island, which will ultimately result in a second bridge to Cayo Costa. Breeze takes action as only he can. He finds himself in an unlikely alliance with the governor as a result.

He’s given another assignment that appears to be out of his league. Can he pull it off, or will it be his downfall?

That’s a song lyric from my favorite singer/songwriter Jim Morris. Jim is a longtime friend of Randy Wayne White, my favorite Florida novelist. Since moving to Florida Jim and I have become friends. Jim knew Randy before he became a famous, successful writer. They used to fish and drink together when Randy was a fishing guide.  I’m honored to call Jim Morris my friend, though I’ve yet to actually meet Randy. I have to settle for good food and drinks at one of his restaurants, Doc Ford’s Rum Bar (Fort Myers Beach and Sanibel Island).

The series of Doc Ford books by Randy W. White are set in southwest Florida. Doc lives in a converted fishing shack in Dinkin’s Bay on Sanibel Island. In real life that beautiful body of water is called Tarpon Bay. We’ve visited there a few times, both by land and sea. Doc’s shack is located in/near a marina, which makes for an interesting cast of characters.

Doc had a shadowy past as some sort of deep, dark agent of the government. His skills come in handy from time to time as he encounters bad guys of all types. His life now is as a marine biologist, but that doesn’t prevent him from finding trouble in his travels. Curiously, even though Doc is a serious and straight-laced man, his best friend is a dope smoking, hippie guru. The scenes, the characters and the plots are all very original and unique.

There are 21 Doc Ford novels in print now, with the most recent being Bone Deep. The NY Times calls it a stunning new thriller.

All these have been highly successful, New York Times Bestsellers. Any are good as a stand alone read, but I’ve found a link that arranges them in chronological order if you wish to read them in order.

If you haven’t yet discovered the Doc Ford books, you’ve got a lot of catching up to do.

Thrillers set in tropical locales seem to be the hot ticket in new fiction. It’s a crowded field with a lot of great competition. I’ve read most of them and will continue to grab up each new one that comes out. It’s hard to stand out in such a busy market, but John H. Cunningham has managed to do so with his Buck Reilly series.

Buck flies a float plane, so Cunningham has developed a sure-fire method to insert his hero into almost any tropical scene with ease. It’s also reminiscent of Jimmy Buffett’s early tales. There are three books in the series and I thoroughly enjoyed them all.

First up is Red, Right, Return:

Buck Reilly’s a lot like the rest of us–trying to make ends meet and hoping for better times. He’s living in a Key West hotel and operates Last Resort Charter and Salvage aboard a 1946 Grumman Widgeon flying boat, hunting for sunken treasure and taking on an occasional passenger, no questions asked. But when he delivers a mysterious woman to a mission boat destined for Cuba, things start going downhill quick. He faces down the dark forces of Santeria priests, Cuban Secret Police, and an FBI agent with a grudge. Buck has nothing but ingenuity to save his skin and the lives he put in peril … and prevent a war with America’s longest-running enemy … When you see the world through Buck Reilly’s eyes, the view will never be the same.

Next in the series is Green To Go: 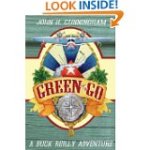 Buck Reilly went to hell and back in Red Right Return. In Green To Go, it’s a one-way trip. Good news turns bad fast, and the bad just keeps coming in this thrilling new Buck Reilly adventure. The unexpected contents of his parent’s Swiss bank account offer Buck a chance to dig himself out of the hole he’s been in since the recession hit, but first he must recover the treasure maps and clues he lost at sea. Those plans get put on hold when a friend is accused of orchestrating the biggest theft in Key West’s sordid history, and the FBI uses Buck’s past against him to demand that he search for the thieves who fled aboard a hundred year-old schooner.

Paid trip to the Caribbean sound good? Buck Reilly thinks so–flying rock stars and celebrities to a remote island for a charity concert seems a breeze–until all hell breaks loose when the promoter disappears and one of the A-list stars is kidnapped. The charity’s vision to revolutionize women’s Choice collides with a collection of threats that sends Buck on a wild race through the Virgin Islands fighting forbidden lust and multiple crazed killers determined to derail the event. When the facts are turned upside down and all seems lost, Buck’s motley network of smugglers, arms merchants, and island eccentrics steer him to a full moon showdown to save not only the victims but the charity’s mission and the woman he’s falling for. Crystal Blue is a white knuckle ride from Key West to the British and U.S. Virgin Islands. A thrilling addition to the Buck Reilly series that includes Red Right Return and Green to Go.

I gave it Five Stars in my Amazon review:  Action, Action, and More Action

I’ve got to give this to Cunningham, he knows how to keep a story moving, and moving fast. There is no downtime in this fast paced adventure. Good old Buck is like an old friend. The supporting characters area interesting in their own right and superbly described. Loved that the settings are mostly places I’ve been to and would love to return to. Right near the end, some might find the rescuer implausible, but it was all in good fun and certainly fit into the plot. Well worth the read.