Fields of the Wood is a religious park of more than 200 acres in Cherokee County, North Carolina, owned by the Church of God of Prophecy. It is best known for its 300-foot-wide, mountainside representation of the Ten Commandments.

A.J. Tomlinson was the visionary who built them. He was working for the American Bible Society when he encountered a sect of down-on-their-luck, speaking-in-tongues Pentecostals in the mountains of southwestern North Carolina. On the morning of June 13, 1903, A.J. climbed to a hilltop and met God; when he walked back down, he had a plan for the Pentecostals. Three years later he was running their sect, which he grew into a multinational protestant denomination that he named The Church of God of Prophecy.

Work began on The Fields of the Wood on November 15, 1940. Its first monument was not the Ten Commandments, but a globe-topped obelisk marking the spot where A.J. conveyed his revelation to the Pentecostals. The second monument was the World’s Largest Altar, 80 feet long, marking the spot where A.J. met God. A.J. said this was only right, since the Bible says that sacred religious sites should be marked with monuments. 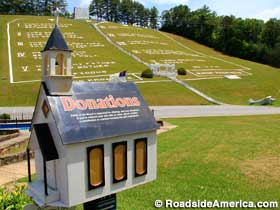 Then A.J. died. He lived just long enough to see his mega-Commandments outlined on a hillside. Following his personal directions, The Church of God of Prophecy completed all of the monuments at The Fields of the Wood in 1945.

On the opposite side of a narrow valley, paved with large parking lots for church crowds, is Prayer Mountain, which rises nearly as high as its neighbor. Its steps are flanked with monuments for the 29 Prominent Teachings of The Church of God of Prophecy, each sponsored by a different state. The teachings include condemnations of liquor (Virginia), tobacco (Washington), freemasonry (North Dakota), swearing (Arkansas), and “the divorce and remarriage evil” (Indiana). Louisiana covers it all with its monument, “Eternal Punishment for the Wicked.”

For all its massiveness, the World’s Largest Ten Commandments are just one of a roster of religious landmarks at The Fields of the Wood. A welcome center booth displays a map, helpfully charting everything on the 210-acre property, from a replica Golgotha to a cartoon-style Star of Bethlehem atop a metal tower. There’s an Empty Tomb — built of stone taken from the mountains — and a baptismal pool big enough to hold a busload of sinners. Christian rock, broadcast from speakers outside the gift shop, fills the little valley.

The highest point in the park is “All Nations Cross,” a prone display optimized for angelic viewing. 150 feet long, the Cross is outlined by poles flying flags of the nations where The Church of God of Prophecy is established. The Cross only has room for 86 flags even though the church now operates in 140 counties (The gift shop guidebook apologizes if your country’s flag isn’t flying on the day that you visit).

Because the entire Fields of the Wood property was built around A.J.’s spot, no thought was given to its convenience for tourists. That makes the World’s Largest Ten Commandments a wholly unexpected spectacle. You round a corner on a backcountry road and, bam, there it is.