I’ve read both of Wayne Gale’s book featuring his character “Bric” Wahl and I’ve got to add them to my list of recommended reads. Set in Key West, Wayne does an admirable job of depicting what the city is really like. Very well written and lots of humor, combined with a fast moving story which is quite believable and intriguing.

Treasure Key: Too Close to Key West, Too Far From Reality 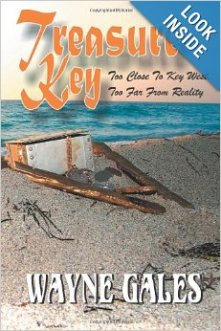 Russell Bricklin “Bric” Whal is the guy that every Key West local knows and every tourist wants to be. Relaxed, tanned by island sun and comfortable in his skin, he slides onto a barstool next to you at Schooner Wharf and lets you buy him a beer. Ex-Navy Seal, Key West native and full time treasure diver, Bric has been searching for a fortune in gold and silver in the Florida Keys his whole life. Today he may have found it, but not the treasure he expected. Diving on a sunken Spanish Galleon, he finds three massive gold bars, not from the wreck that sunk in 1733, but apparently from the Civil War. Bric thinks he’s finally unearthed his fortune. Or has he?

Read that one first. Then pick up a copy of

After finding millions in treasure, Russell Bricklin “Bric” Wahl has suffered a terrible loss, and embarks on a long and dangerous journey to find thieves and murderers. Missing Spanish gold, Greek mobsters, racing in Baja, a near fatal deep water dive in England and a dangerous rail journey in Europe. make for “Cant put it down” mystery reading in this fast-paced sequel to “Treasure Key”