Book One is on sale for 99 cents this weekend. There are five books in the series.

A betrayed criminal. A kidnapped child. A deadly race against time.
On the Island of the Gods, expedition leader Hiram Kane is on holiday after a long season guiding in the Peruvian Andes.

When a good friend’s greed leads him to betray Bali’s most notorious gangster, their peaceful community is left shell-shocked after the six-year-old daughter of its leader gets kidnapped in a vicious and violent raid.
What follows is a whirlwind race across the paradise island to rescue the girl before ‘The Rooster’ takes his sadistic revenge, and with the waking giant of volcanic Mt. Agung threatening to destroy them all, Kane risks everything to prevent a devastating tragedy.
The Tiger Temple is the exciting new starter to the Hiram Kane adventure series. For fans of Russell Blake and Clive Cussler, Steven Moore’s action thriller will leave you breathless.

To delve into the globetrotting world of Hiram Kane, buy your copy of The Tiger Temple, today!

Breeze is part rebel, part knight in rusty armor, and every ounce his own man. He’s a rugged, reclusive Florida boat bum, living on the outer edges of society. He’s on the run from his past, but that doesn’t stop him from growing dope on one island and brewing rum on another.

Trouble finds him, no matter how far off the grid he goes. He has a knack for getting out of predicaments, mostly of his own making. The women come and go. Breeze is the new anti-hero of Florida Fiction.

Readers are loving this new series. The reviews have been excellent. Click the links above or see all of my books at my Amazon Author Page:

Paul Carr has written two novels featuring his tough guy hero Sam Mackenzie. Trouble follows Sam as he bounces from the Keys to the Caribbean. If you like fast paced, bullet-flying adventure stories with a Florida Keys and Caribbean bent, you’ll appreciate these two.

Candi Moran is in trouble. Vince La Salle, a Miami loan shark, wants her dead because she knows too much about his secret in the Caribbean. Candi is shot by one of La Salle’s men and turns to Sam Mackenzie for help. Sam, who is good with a gun, takes on the job, but he soon learns that Candi left out some dangerous details as he unravels La Salle’s sordid past. La Salle is involved in a high-stakes project in the Caribbean, but where he’s getting his money is the big mystery. Sam dodges bullets, missiles, karate kicks, and sharks. He gets help from an associate, John Templeton Smith III (J.T.), but Sam worries that J.T.’s greed might get them both killed as they navigate a serpentine trail of assassins, con artists and deadly financiers.

In The Cayman Switch: Jack Craft is a con man. When he sells a Key West resort he doesn’t own to a trio of crooks, the deal turns sour and he calls Sam Mackenzie for help. By the time Sam arrives, Jack is gone, and even the bad guys are in the dark. Delray Jinks is pretty unhappy about being swindled on the resort. Sam knows him from their past days in clandestine government work, and knows what he’ll do if he doesn’t get his money back. A fortuneteller, prescription drug dealers, and the mob, are all after a piece of the action. Mona Miles, a beautiful TV reporter, wants the big story, but her relationship with Sam puts her in the line of fire. As Sam unravels a deadly trail that leads to Grand Cayman, and back, he learns that Jack’s resort scam is just the beginning of the con. 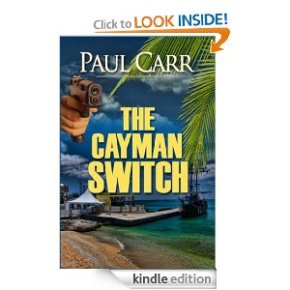 The Independent Voice of Appalachia